LED lamp output values (Lumens) can vary dramatically depending on which values are being quoted. The following information may assist selecting the right product for the right application.

This is a measure of the actual output of a light. The Effective Lumen output takes into consideration electrical and real world losses (ex. thermal, optical, and assembly), so it is a better representation of the useful visible light that is actually produced.

What do you mean by Thermal Losses, Optical Losses and Assembly Losses?

There are inherent losses associated with any lamp (LED, Halogen, HID or Incandescent). The main losses are related to 3 items: Thermal Losses, Optical Losses and Assembly variation. LEDs produce less light as they get hotter and generate a tremendous amount of power in a relatively small area. As the LEDs are powered for longer and longer periods of time, they typically get hotter and hotter depending on the thermal management system. It’s not unusual for LEDs to reach over 100ºC.

The greatest challenge is thermal management of LEDs. LED manufacturers typically measure the light produced by their LEDs after 25 milliseconds (ms). That is equivalent to a flash bulb. It gives a Lumen number that is the absolute maximum value.

For vehicle applications, most specifications require that the lamp be measured at 10 and 30 minutes to make sure that the LED temperature has stabilized. This will result in the LED producing 10 – 20% less light than it’s advertised value. 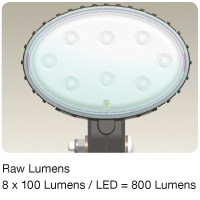 As light travels through an object (such as a lens), it loses intensity depending on the clarity of the material. This is due to inherent losses internal to the material and to losses at the boundary of the part as the light travels from air, through the lens, and back to air.

These losses are present whether the light source is an LED or a bulb. The losses associated with the lens material and optics can vary from 10 – 20%.

There are also losses associated with assembly and manufacturing variation. The LED output varies as the assembly tolerances may diminish the overall performance from theoretical LED maximums.

Simply adding the expected values of the LED light sources together will never result in a lamp that shines that amount of light on the ground.